A space that brings together activities, debates, seminars, initiatives, etc., promoted or supported by the OCAA.

The website reveals banks and investors exposed to deforestation risks in Southeast Asia, Africa and in Brazil. The coalition seeks to achieve improved financial sector transparency, that ultimately prevent financial institutions from supporting the kind of environmental and social abuses that are all too common in the operations of many forest-risk sector clients.

The European Union Delegation in Brazil promoted this initiative through a series of Workshops and Online Conference, between September and December 2020, in order to inform about the Trade and Sustainable Development Chapter (TSD) of the Association Agreement EU-Mercosur.

Series of webinars from the Amazon Observatory on Trade and Environment (OCAA) with debates based on studies on “international trade” and “environment”.

Free access portal to the Brazilian foreign trade statistics. Create detailed queries on Brazilian exports and imports with the various variables in the statistical database.

The platform provides an unprecedented view of the nine states of the Legal Amazon, bringing together 113 indicators on 11 topics such as science and technology, demography, social development, education, economy, infrastructure, institutional, environment, sanitation, health and safety. The tool provides comparative and evolutionary analysis of the region in the last 10 years.

The Atlas of Economic Complexity

The Harvard Growth Lab’s data visualization and research tool is used to understand economic dynamics and opportunities for all countries in the world. The platform allows you to customize data for any country, revealing more than 50 years of global trade flows across more than 6,000 products and services, along with new opportunities to drive growth.

“Amazoniar” proposes a series of live streams in the format of informative debates on social networks, in large thematic cycles, related to the Brazilian Amazon and whatever is of interest to Brazil’s relations with other countries. 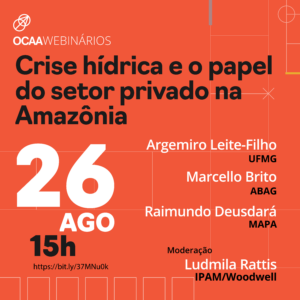 The whole world has been discussing proposals to save the Amazon, but the first step is about shifting to a narrative in which development is not based only on economic growth. “We are still forced to justify how to conserve the forest from the perspective of what could be an economic gain, without a proper space to address the real value of the forest in its multiple dimensions”, highlighted Adriana Ramos, political and socio-environmental rights advisor at Instituto Socioambiental (ISA), during her participation in an Amazoniar event last Thursday (15/07), under the theme “One Amazon in 9 countries: countless cultures in a single biome”.

For Gregório Mirabal, general coordinator of the Coordination of Indigenous Organizations of the Amazon Basin (COICA), who also participated in the last Amazoniar meeting, the multiple crises triggered by the Covid-19 pandemic show the urgency for a broader look at the region. “The pandemic has no borders […] there is no distinction of ideology or political party. Everyone seems to see the Amazon as a business, as a way out of the economic crisis”, he said.

“Our biggest problem is strong economic interests that are often seen as more relevant than conservation interests”, mentioned Ramos. According to her, information can help and offer more elements for society to mobilize for change, but the struggle “will always be of an economic nature, against an exploratory and colonial logic that is not designed for the development of the Amazon itself”.

The key is already in the Amazon

Ramos warns that the answer for the conservation and development of the Amazon lies within the territory: “It is arrogant of our society to seek a solution by trying to reinvent things that have been part of the indigenous reality for centuries.”

For her, bioeconomy illustrates this situation well. “I believe that the economy based on the standing forest and the use of biodiversity can be a path for the future, but it cannot be a bioeconomy made inside laboratories trying to reproduce the value of biodiversity outside the forest”, she said. “Indigenous peoples bring us a diversity of repertoire and possibilities that does not need to be reinvented by modern science. It first needs to be respected so then we can think of any other solution that comes from there”, she emphasized.

“We were born in the forest and have always learned to coexist, value and respect our territories.
We think of the Amazon as a living being, of which we are a part. What we manage to conserve from nature is the result of our millenary work, which is key for humanity to continue living”, added Mirabal.

According to Ramos, we need to listen to the indigenous perspective and review our way to develop solutions, by looking at this millenary knowledge of the sustainable use of the forest. “All that science was able to prove was recognizing that the traditional management of indigenous peoples is the best way to keep the forest standing”, he said.

She also denounced the fact that many companies that threaten indigenous territories through the exploitation of natural resources use speeches of socio-environmental responsibility and climate commitment. “We need to place traditional knowledge and the defense of indigenous territories as the central axis of any perspective for the future of the Amazon. Shifting the narrative is a work that we all need to do collectively. Only then will we actually be able to build alternatives for a fairer Amazon. These are big challenges, but the indigenous peoples give us many keys for this”, she said.

Another challenge in the region is the territorial governance, which has been a central issue for indigenous communities. The Pan-Amazon crosses nine countries, is home to more than 400 indigenous peoples, has the world’s largest hydrographic network, contains the largest carbon stocks and one of the highest concentrations of biodiversity on the planet. And this land of superlatives needs governance that meets its grandeur and transcends geopolitical borders.

“Ten thousand years ago, there were no other governments or other peoples in this territory. It is important to consider communities and nations with the right to self-determination, because we have our own territorial government”, pointed out Mirabal. “We have very different institutional political contexts, especially from the point of view of socio-environmental policies, recognition of the territorial rights of indigenous peoples and environmental conservation, but with similar challenges”, explained Ramos.
For both, a more integrated vision of the Amazon is needed, and it is from the articulation of the different actors that coexist in the region that it will be possible to think of better shared governance of this territory that is so important to the world.

Amazoniar is an initiative by the Amazon Environmental Research Institute (IPAM) to promote a global dialogue on the Amazon forest and how it influences the relations between Brazil and the world.

The second cycle of discussions focused on indigenous peoples and their importance to combat deforestation, their contribution to science and culture, as well as to the sustainable development of the region.

Sign up for Amazoniar’s newsletter to receive news about the next events.

Amazonia Rising: A Global Summit on Investing in the Amazon

The Amazon rainforest is critical for global climate stability and its ecological integrity is at risk. Investors, philanthropists, governments, celebrities, companies, NGOs, indigenous groups and allies will convene online to advance forest-friendly economic development and the rule-of-law across the Amazon region of South America. They will work in partnership with local communities and design systems of conservation finance that sustain people and forests.

The event brings together specialists and entrepreneurs in the forest to discuss issues relevant to the business of Amazônia. With the participation of Ricardo Abramovay, Senior Professor of the Environmental Science Program of IEE / USP; Mariano Cenamo, director of new businesses of Idesam and CEO of AMAZ Impact Accelerator; Geferson Oliveira, CEO of Navegam; and Ana Paula Nacimento, president of Coex Carajás.

Overcoming obstacles to the implementation of the Mercosur-EU agreement

The meeting presents the actions of the business sector and the views of the Executive and Legislative Powers of Brazil on the process of conclusion and ratification of the agreement.

Convergence for Brazil and the International Chamber of Commerce in Brazil (ICC Brasil) present the webinar“ The future of international trade and climate barriers ”, with the presence of the former Minister of Finance and signatory of Convergence for Brazil Maílson da Nóbrega, Klabin’s CEO, Cristiano Teixeira, and ICC Global’s Deputy Director of Trade and Investment, Damien Bruckard.

After 20 years of on-and-off negotiations, the European Union and Mercosur states – Argentina, Brazil, Paraguay and Uruguay – reached a political agreement for a trade deal. To become effective, it needs the ratification of all countries involved (27 in the EU and 4 from Mercosur). Although the EU is implementing environmental provisions at the bilateral and regional level since the 2011 EU-Korea Free Trade Agreement, this is the first time that the Mercosur agree to such a Trade and Sustainable Development (TSD) Chapter. Experts will explain the recent developments and challenges ahead for both regions.

ESG and its impacts on foreign trade

Valor Econômico brings together actors from the agribusiness, timber sector and private environmental management to discuss the recent highs of deforestation in the Amazon and the image of relaxation in environmental inspection that have put the opening of foreign markets for Brazilian exports at risk.

The OAB’s seminar brings several experts to comment on the EU-Mercosur Agreement, mostly, from a juridical perspective.

Canning House promoted a discussion on progress, perspectives and possibilities of regional and international trade alliances in Latin America.

The IBDA’s Webinar brings Brazilian agribusiness’ experts to discuss perspectives on the United States in the Biden era and the Asian free trade agreement (RCEP), which is currently under discussion.

Workshop on the EU-Mercosur Agreement I Environment, climate and international trade

The European Delegation organized a series of workshops to dialogue with Brazilian civil society on the chapter “Trade and Sustainable Development (TSD)” of the EU-Mercosur Agreement, especially from the perspective of how to guarantee labor rights and environmental protection.

The event, promoted by IRICE, brings a round table that discusses the environmental policies and external trade relations.

Debate on the EU-Mercosur Agreement, with the European Union ambassador to Brazil, Ignácio Ybáñez, the Bilateral and Regional Negotiations in the Americas secretary at the Ministry of Foreign Affairs, ambassador Pedro Miguel da Costa e Silva, and PSL Rio de Janeiro deputy and president of the Parliamentary Front Brazil – European Union, Gurgel.

The panel discusses the correlations between the European Union debate on the Green Deal, the negotiations with Mercosur and the global climate emergency scenario.

This event discusses general aspects of the book, which analyzes the current status of trade relations between EU-Mercosur, including reflections on the implications of the socio-political context on both sides of the Atlantic, the environmental perspective involved and the history of trade exchanges.